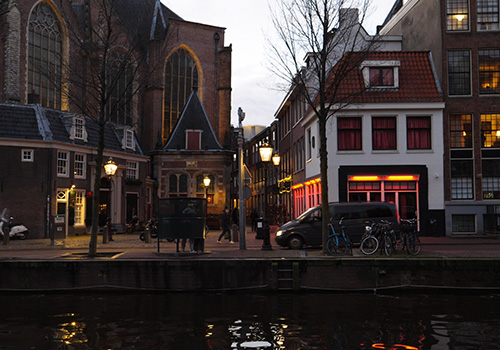 COMMUNITY AS AN AGENT OF CHANGE

The amount of tourists visiting Amsterdam is expanding with a million a year. Especially De Wallen, internationally known as the ‘Red Light District’, attracts many tourists with its image of ‘anything goes’. At the same time, this neighbourhood is the home of many residents struggling with the effects of neighbourhood change, influenced by the process of globalization and shaped by urban tourism. ‘Our Village: De Wallen’, is an ethnographic film showing how the desires for a stronger sense of belonging and a more liveable neighbourhood have led to greening initiatives by residents of De Wallen neighbourhood.

Eva Krol is a young documentary filmmaker and visual anthropologist based in Utrecht, The Netherlands. After a bachelor in Cultural Anthropology and Development Sociology in Utrecht, she started the master Visual Ethnography at Leiden University. At this moment she is further developing her documentary filmmaking skills during an internship at production company De Familie Film & TV.