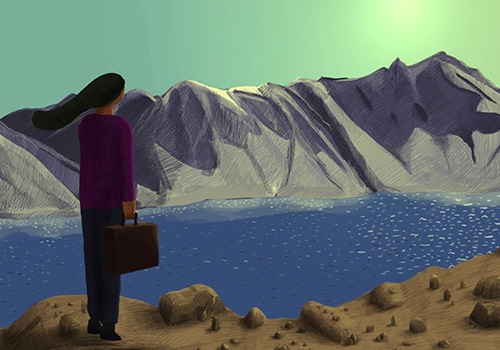 MOTIVAZIONI DELLA GIURIA:
Migrante is an animated short film created by more than 50 animators from 11 countries in Latin America. It shows the complexity of migration, generated by different motivations regarding living conditions, family situations, travel arrangements and legal status. It underlines the difficult aspect to live abroad, away from home, by spreading a positive message about cultural diversity.

SINOSSI:
Migrante is an animated short film with a powerful message in favor of migration, built on real testimonies that were animated by more than 50 animators from 11 countries in Latin America.
Each of the 30 segments that make up the short film is brought to the screen through the unique style of each animator. Latin American cultural diversity will be represented through the heterogeneity of proposals, turning Migrant into a true animated mosaic.

Ezequiel Dalinger is graduated in Design of Image and Sound by the University of Buenos Aires (FADU – UBA) and is studying a Master in Administration of cultural and creative organizations (FCE – UBA).
Director and creator of ANIMA LATINA, Latin American Animation Film Festival (Buenos Aires, Argentina). He has also programmed for other festivals and organizations. He has served as jury member and speaker at numerous national and international film festivals and markets.
He currently contributes as a journalist to different national media and also has published many articles in academic journals.
His latest project is Migrante, a collaborative animated short film about migration that involved more than 50 animators from 11 countries from Latin America.