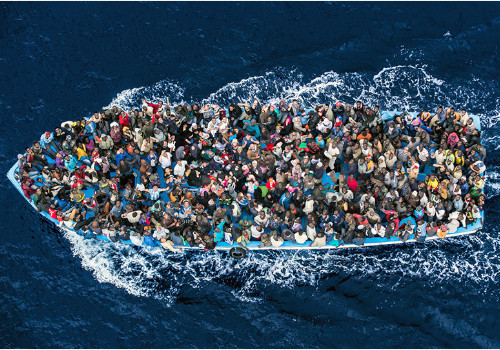 Perspectives on Migration and Humanitarian Crises

Wael Sinno graduated with a bachelor’s degree in architecture from the Lebanese American University’s School of Architecture and Design with honors in 2013. Sinno’s work has been exhibited on a number of occasions while his thesis project was published in the LAU magazine. A registered architect in Lebanon, Sinno has worked with Dar al Handasah, a leading international multidisciplinary project design consultancy, for 5 years on numerous projects ranging in scale from urban planning and design to infrastructure, transportation, and residential projects. Additionally, in 2014, Sinno worked on the renovation of traditional apartments in London with Orproject. In 2016, Sinno volunteered as an architect and urban planner to take part in public spaces projects for Syrian refugees living in temporary encampments. Afterwards, in 2018, Sinno received a Dutch Government scholarship to complete a postgraduate diploma in Green Cities for Eco-Efficiency at Erasmus University Rotterdam. After coming back from Rotterdam, Sinno joined the team at UN-HABITAT as the Area Coordinator for Beirut and Mount Lebanon to plan, manage, and develop humanitarian projects related to civil society and local authorities’ empowerment, urban analysis, community-led neighborhood upgrading projects, and public spaces.

Husam AlWaer is an urbanist with a background in "Architecture, Urban Planning and Sustainability", who writes and speaks extensively on making better places. He is an award-winning author and curator of events, focussing on issues of place making and urban design practice and their social impacts. He is an educator, facilitator and moderates events nationally and internationally. He is a Reader in Sustainable Urban Design in the School of Social Sciences (Architecture + Urban Planning), University of Dundee, having previously researched and taught at Reading and Liverpool universities.
He is the MA Urban Planning Programmes Director. He has a passionate interest in the future of sustainable places, and towns, in particular the development of new thinking on processes and methods to unlock sustainable urbanism and the way these processes are facilitated and managed. His work sits at the intersection of disciplines (sustainability, urbanism, urban design, architecture, anthropology), the intersection of spatial scales including their core and periphery (Buildings, Streets, Neighbourhoods, and Cities), and at the intersection of theoretical and contemporary thoughts, policies and applications.

Kilian Kleinschmidt is an international networker and humanitarian expert with over 25 year experience in a wide range of countries, emergencies and refugee camps as United Nations official, Aid worker and Diplomat. He is the best known and most published aid worker in the world.
He most recently became known as the “Mayor of Zatari” when he managed on behalf of UNHCR the refugee camp of Za’atari in Northern Jordan from 2013-2014. Za’atari has become a symbol for new and innovative approaches in refugee and humanitarian management under his leadership. His previous senior roles included Deputy Humanitarian Coordinator for Somalia, Deputy Special Envoy for Assistance to Pakistan, Acting Director for Communities and Minorties in the UN administration in Kosovo, Executive Secretary for the Migration and Refugee Initiative (MARRI) in the Stability Pact for South Eastern Europe and many field-based functions with UNHCR, UNDP and WFP. He worked extensively in Africa, South Eastern Europe, Pakistan and Sri Lanka.
As the founder and President of the Startup “Innovation and Planning Agency” (IPA) Kilian Kleinschmidt now aims at connecting the millions of poor and dispossessed with the idle and under-utilised resources and modern technologies of the 21st century. He is part of a number of arts projects and various initiatives which aim at global connectivity through better use of globalisation. He is challenging the Humanitarian Aid Sector through a range of new and unorthodox partnerships, technologies, and financing. His work on emerging cities and urbanisation is widely recognised. Team building and leadership in Crisis situations are a focus of his work.
Kilian Kleinschmidt is a frequent speaker and has held public inspirational and thematic speeches and lectures for instance at TEDx Hamburg and many international conferences. Kilian Kleinschmidt has appeared in over 100 documentary TV reports, talkshows (Germany, Japan, US, etc) and featured prominently in hundreds of news and feature articles in numerous languages.